Ananda Veethi - The path of bliss 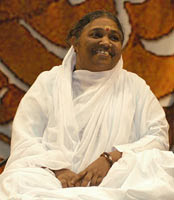 "One day I strongly felt the urge to be absorbed in the Supreme Being without returning. Then I heard a voice from within saying, ‘Thousands and thousands of people in the world are steeped in misery. I have much for you to do, you who are one with Me.’”

Seeing the whole world as an extension of her own self, Amma is ever ready to forego her own body’s needs in order to bring a smile to someone’s face, wipe their tears or to simply listen to their sorrows. The sweet manner in which she laughs and jokes with people, shares in their success and failure has endeared millions to her throughout the world. Questions about the nature of the soul, the universe and God; about Dharma, love and family life; about meditation and other spiritual practices - Amma has been clearing the doubts of sincere seekers on such subtle subjects since her youth.

"Amma’s hugs and kisses should not be considered ordinary. When Amma embraces or kisses someone, it is a process of purification and inner healing. Amma is transmitting a part of Her pure, vital energy into Her children. It also allows them to experience true, unconditional Love. When Amma holds someone it can help to awaken the dormant spiritual energy within them, which will eventually take them to the ultimate goal of Self-realization." — Amma

Posted by Max and Sandra Desorgher at 12:10